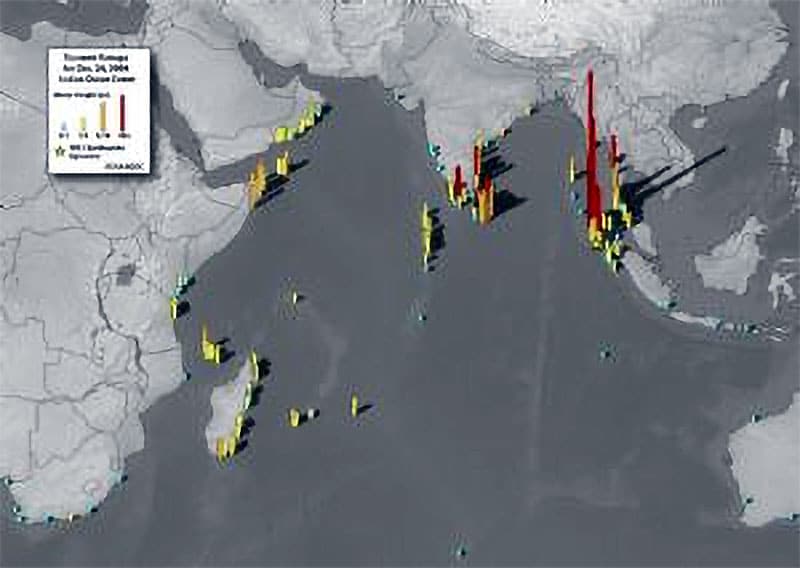 The December 26, 2004 magnitude 9.1 Sumatra, Indonesia earthquake (3.316 N, 95.854 E, depth 30 km) generated a gigantic tsunami that was observed worldwide and caused tremendous devastation and deaths throughout the Indian Ocean region. The earthquake, the third largest since 1900, caused severe damage and casualties northern Sumatra, Indonesia, and in the Nicobar Islands, India. No separate death toll is available for the earthquake as the tsunami followed within 20 minutes. The death toll was probably no worse than for the earthquake of March 28, 2005–that is, fewer than 1,000.

According to the NOAA National Geophysical Data Center/World Data Service for Geophysics Global Historical Tsunami Event database 2,229 tsunamis have occurred in the world since 2000 B.C. Of these tsunamis, 1,212 are considered confirmed tsunamis. In the Indian Ocean region, 69 confirmed tsunamis have been observed since the beginning of the 18th Century, and 22 (32%) of these events caused deaths. Three of these deadly tsunamis occurred after the December 26, 2004 event. The majority of Indian Ocean tsunamis were generated by earthquakes (88%), the remainder resulted from volcanic eruptions (6%), landslides (1%), and unknown causes (4%).

In the 10 years since, much has been done by the region to ensure this catastrophe never happens again. Countries now know what a tsunami is and have prepared communities. National Tsunami Warning Centers now exist in every country, and they are working with National Disaster Management Offices and local government officials to warn their citizens on impending dangerous regional and distance tsunamis. A regional international warning system is now in place under the framework of the UNESCO IOC Indian Ocean Tsunami Warning and Mitigation System, with Australia, India, and Indonesia working together as Tsunami Service Providers for the region. The TSPs were officially took over in April 2013, replacing the Pacific Tsunami Warning Center and Japan Meteorological Agency who had provided interim advisory services starting immediately afterward in March 2005. Over the years, many donors and support organizations worked with countrys to build their tsunami warning and emergency response capabilities. ITIC, working with the IOC, conducted 30 trainings on tsunami warning and emergency response standard operating procedures to assist countries in building their warning systems.

On November 24-25, 2014, the IOC convened a high-level policy conference “The IOTWS 10 years after the Indian Ocean Tsunami: Achievements, Challenges, Remaining Gaps and Policy Perspectives.” Hosted by the Government of Indonesia, the conference brought together countries, donors, and experts to recognise the achievements of the last 10 years, to highlight work that still needs to be done, and to seek re-commitment to continued investment in the IOTWS.